Tony’s Town Square Restaurant, near the entrance of Main Street USA is an Italian restaurant themed to the spaghetti and meatball scene in “Lady in the Tramp.” The location on the end of Main Street USA is a prime spot for popping into the park for a quick meal, or for scoring a table outside during the parade, which is what we did on our most recent visit.

As it was January, the park was relatively “cold,” cold by Florida standards, on the slightly cooler side of comfortable by New England standards, especially for the time of year. The real downside to this however was that when we arrived at the podium it did not seem like the cast members were seating guests outside. Being that our reservation was for 2:45 PM, I asked about outdoor seating, and the hostess was kind enough to check with the waitstaff if anyone wouldn’t mind serving a table outside. One of the waiters was fine with it, and he actually ended up taking on two other tables outside in addition to us, regardless of the chilly temperature.

Since we were outside for this meal, I cannot really comment on the interior of the restaurant. As far as I can tell, it is designed similar to a typical Italian American restaurant with detailed touches here and there that serve as reminder of the movie the location is based on. One of the most notable decorations in the interior that we did manage to walk by on our way to the patio area, was a beautiful sculpture of Lady and the Tramp, surrounded by a fountain and dark wood surfaces. Aside from the indoor/outdoor dining areas, there is a small greenhouse/sun room sort of seating area right next to the entrance to the patio, which was pretty but I think I would prefer to either be completely indoors or outdoors.

As for the menu, Tony’s features typical Italian-American style dishes, mixed with house specialties, one of the more popular options presumably being spaghetti and meatballs due to the scene from the film the restaurant is based on. You can see the full lunch/dinner menu here.

Every meal at Tony’s starts off with warm bread and oil. While I would not rank this as one of the best pre-meal breads in Walt Disney World, it is very good and definitely worth losing some valuable stomach real estate to before your entree comes out.

For appetizers, we each ordered a salad, although next time I think I’m going to give the fried calamari a try. I went with my usual choice of salad– Caeser, while Chaz opted for something more unique to this restaurant– the Insalata Fresca. 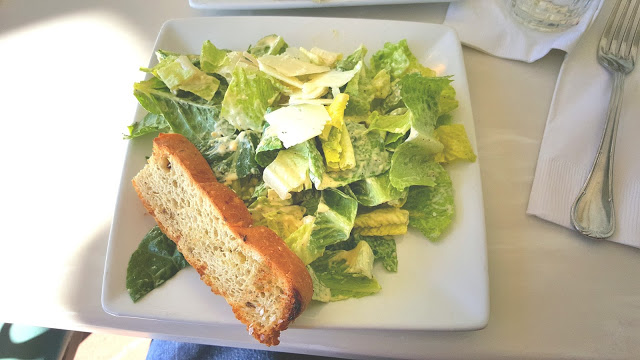 The Caeser was very good, and I especially liked the larger piece of bread as opposed to croutons. (I don’t generally like croutons– for some reason I’m just not into having them mixed into the salad I guess, so I’d actually prefer a piece of bread on the side as this salad had). There was just the right amount of dressing, and lettuce was crisp and chilled. The only reason why this salad was not anything all that special was because it was a kind of salad that one could order anywhere, so just for that I might go with something more unique to Tony’s like Chaz did next time I’m here.

Chaz’s salad, the Insalata Fresca was made up of “wedged Baby Iceberg, creamy Italian dressing, gorgonzola, candied walnuts, and bacon,” and we both agreed that this would be salad choice to go with at Tony’s. I would say that the Caeser was equally as good, though this one is more unique, where you can order a Caeser salad at many other locations around Walt Disney World. Again this salad had just the right amount of dressing, and the other toppings all complimented the dish very well.

For entrees, Chaz went with his usual go-to option for any Italian restaurant and ordered Chicken Parmiagiana, while I opted for something different this time and went for one of Tony’s specialty dishes, the Cannelloni.

The chicken parm was interesting. I generally like my chicken parm to have a lot of cheese, probably more cheese than the average person would actually like to see on the dish, so when I saw the amount of cheese pictured above, I was a little bit put off. Chaz seemed to really enjoy it regardless, so I gave it a try. It was much better than I had expected, and to be fair there is more cheese that is not shown in the picture because it is under the sauce. It’s hard to explain this dish– to me that’s not enough cheese, but the chicken itself and the sauce was so good that it makes up for it, if that makes sense? Chaz did really like it, and said that he would order it again,but if you’re thinking about getting this dish in the future be warned that it is not the cheesiest of chicken parms.

I was very happy with my dish, and would highly recommend this if you’re looking to get away from the standards like spaghetti and meatballs, and chicken parm. The Cannelloni is pasta “filled with a mixture of ground beef and sausage, Mozzarella, and Ricotta served with marinara and crème sauce.” What really made this dish sound interesting to me was the marinara mixed with the creme sauce. I feel like I’ve seen similar items with a tomato creme sauce, however this one sounded rather unique with the two different sauces served in the same dish. The Cannelloni was my favorite part of our meal at Tony’s and I would definitely order it again here in the future. It had all the components you would want to order at Tony’s with the pasta and ground beef, but the mixture of the two sauces really complimented each other and gave an otherwise classic dish a more unique spin.

Neither of us ordered dessert on this visit, as we were rather full at the time so we figured we’d wait… although ironically we lost self control and ended up having gelato later in the day, so really we could have just had some while we were at Tony’s! Overall, we really enjoyed Tony’s, and I think I would prefer it for lunch over dinner, as I’ve become very partial to the dinner at Be Our Guest for a table service meal in the Magic Kingdom. For something more casual, or even something everyone in your family should like, as nothing on the menu is too adventurous, Tony’s is a solid option with a convenient location right near the entrance to the park.

We did really enjoy our meal, but we also understand why Tony’s tends to get a bad rep among guests– simply put, if you go into Tony’s expecting relatively generic Americanized-Italian food, you will not leave disappointed. We enjoyed the food, though we obviously realize this is not authentic Italian. That being said, we would dine here again and we can’t wait to try the desserts!