Yak & Yeti, located in Asia in Disney’s Animal Kingdom, lends guests a refreshing taste of Asian cuisine fused with contemporary American fare. Based around the corner from Expedition Everest, the decor of this restaurant blends seamlessly with the authentic village feel that captures this area of the park.

To be perfectly honest, with Yak & Yeti being part of Landry’s Restaurant Group, my expectations for this restaurant were not exactly through the roof before I had eaten there. (Landry’s is the company that runs T-Rex Cafe and the Rainforest Cafe along with a host of other restaurants that they have either created or purchased over the years). There is nothing quite wrong with T-Rex Cafe or Rainforest Cafe, especially if you’re looking for that kind of interactive family dining experience like you probably would be if you’re in Walt Disney World in the first place… but the food isn’t what I would call excellent or even great.

Having dined at T-Rex Cafe and Rainforest Cafe, along with a couple of other Landry’s chain restaurants, I’ve found that the food is good and the atmosphere is really what makes the experience. This isn’t to say I’ve ever experienced anything wrong with the food, it just doesn’t isn’t really memorable.

Going into my first time dining at Yak & Yeti then, I imagined that the food would be of a slightly higher quality than what you’d get at a chain restaurant. Thankfully, I was wrong.

The first thing you’ll notice about Yak & Yeti, as I did numerous times before actually eating there, is the smell from the open doors of the host station that draws you in. Not literally if you don’t have a reservation, but you get the idea.

Even just from a quick glance at Yak & Yeti from the outside will fully immerse you into the story of this location… which is actually quite long and convoluted, but all of the details are on the back of the menus if you are ever interested in learning the full back story. The short story is that the building was once an inn owned by a well-off and well-traveled proprietor who has collected all of the various pieces of art and artifacts that you’ll notice around the restaurant.

Small touches like room numbers of certain doorways and luggage by the host podium really drive home the story that the building used to operate as an inn, while the array of artifacts places you right at the base of the Himalayas where it’s not hard to imagine someone of a higher status collecting and displaying all of these goods. 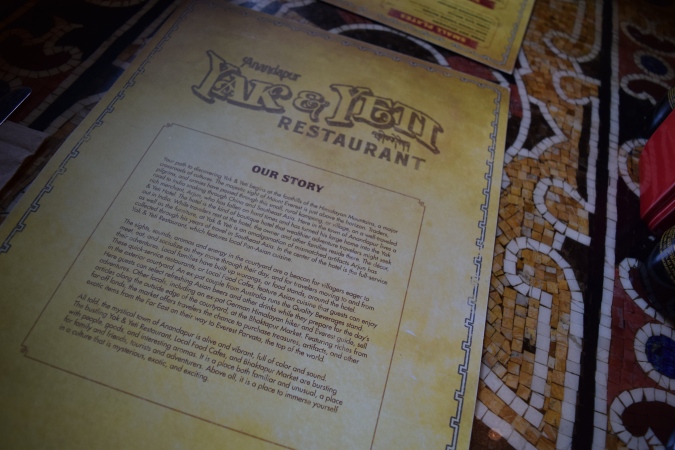 There is so much to explore inside Yak & Yeti in terms of theming, that it really wouldn’t do it justice to try to squeeze it all into one short review. If you do happen to dine at Yak and Yeti however it is worth walking around and peeking into the different rooms (and floors!)

For a cocktail at Yak & Yeti our suggestion is the Pink Himalayan, which features Tanqueray, gin, ruby red grapefruit juice, passion fruit and lemon grass flavors, and an optional salted rim. At first glance I thought it would have been too sweet for my liking, but it’s actually light and refreshing, and although it is served in a tall glass it’s not too filling and complements the meal well. 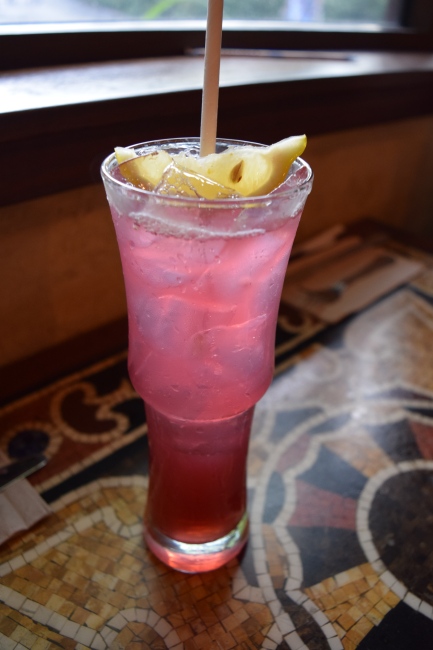 If you’re more of a beer drinker (and you read this blog) it should come as no surprise to you that our beer of choice is the Safari Amber. The Safari Amber actually happens to be my favorite beer, and while I honestly hate buying overpriced beer vs. overpriced hard alcohol in a theme park, when in Animal Kingdom I usually can’t resist one of these:

For starters, we tend to go with the soup or salad. All of the appetizers and shareable plates on the menu sound delicious, and we’ve heard really good things about the Ahi Tuna Nachos and Wok Fried String Beans, but we’ll have to get back to you when we try them for ourselves! 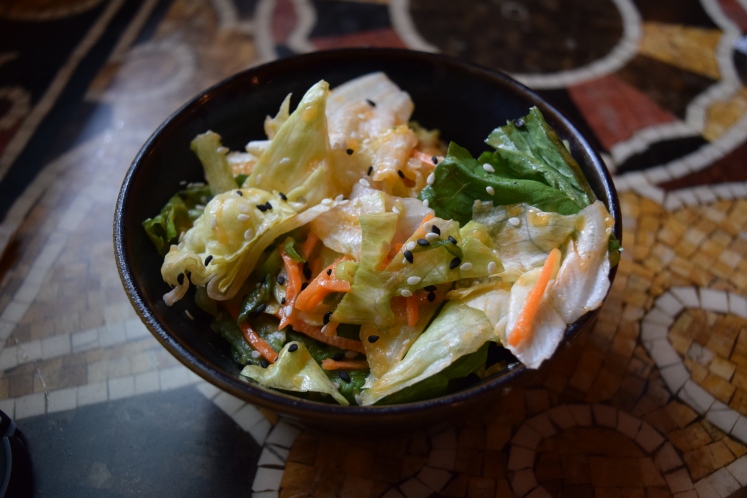 Ginger salad dressing is a favorite of mine, and even with other appetizers sounding delicious it’s not easy for me to pass this up. Pictured above is the House Salad, which although delicious we find to be priced quite high for a small bowl of what is essentially romaine lettuce and stringed carrots (at $5.99 during our last visit). 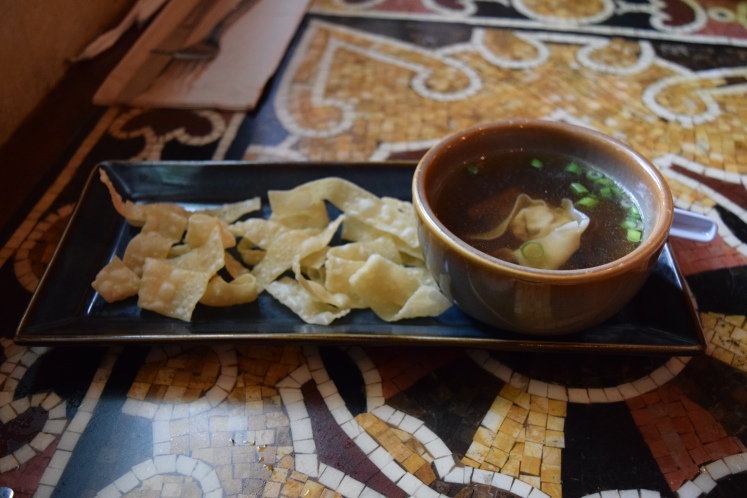 I adore the presentation of the Wonton Soup, and it’s one of the better variations of this dish that I’ve tried. I often skip Wonton Soup for something else as I don’t find the broth to be all that flavorful most of the time, but Yak & Yeti does it right.

One of the most popular entrees at Yak & Yeti is the Crispy Honey Chicken, which although popular actually has mixed reviews among guests. We think the Honey Chicken, (tempura chicken, sugar snack peas, carrots, honey sauce, and choice of jasmine or brown rice) is quite delicious although we do have to agree that it is dangerously similar to the similar version of this dish that is served at the Yak & Yeti counter service restaurant.

For $8 less we would suggest ordering this dish from the counter service location if you’re really having a craving for Honey Chicken. If you do want to dine at Yak & Yeti regardless though and this is the dish you want to go with, you won’t regret the taste but your wallet may not be happy knowing there is something so similar around the corner at the Yak & Yeti Local Foods Cafe. 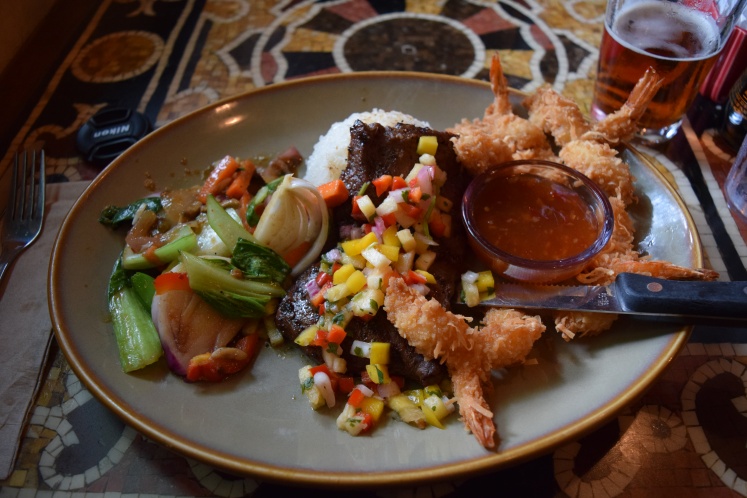 Everything about this meal was delicious, from the fresh vegetables to the shrimp and steak that were cooked perfectly. Although I don’t like wasabi, so I have never tried this with the mashed potatoes, I quite like how it goes with the rice. If you’ve had the teriyaki steak topped with pineapple at Kona Cafe this dish is similar when you add the rice.

Unfortunately we’ve never had room for dessert at Yak & Yeti, but the general consensus is that the Fried Wontons are a must-have if you manage to save some room. The Fried Wontons are made with skewers of fresh pineapple and cream cheese Wontons, vanilla ice cream, and honey-vanilla drizzle.

All in all we love Yak & Yeti. We’ve had nothing but excellent experiences here, and we think the atmosphere is one of the best and most elaborately detailed of any restaurant in Walt Disney World. We’ve only taken off points for some items being overpriced (like the small salad or the Honey Chicken that is almost exactly the same as the quick service counterpart). Yak & Yeti earns major points for having a larger menu than many Disney restaurants, and offering more exotic entrees like curry and noodle dishes alongside burgers, making it a great pick for a variety of eaters.