Beaches and Cream is the soda fountain, ice cream shop and restaurant located at Disney’s Beach Club Resort. Our first time at Beaches and Cream was actually just this year, so our preconceived notions of it were just from what we have read and seen online. Going from that, we were surprised at how small it was– not that this mattered at all, if anything it just means that the photos we’ve seen from there make it seem a lot bigger. Given how small Beaches and Cream actually is (about three or four booths, a couple of tables, and a takeout window), we were very relieved to have made reservations earlier in the day. 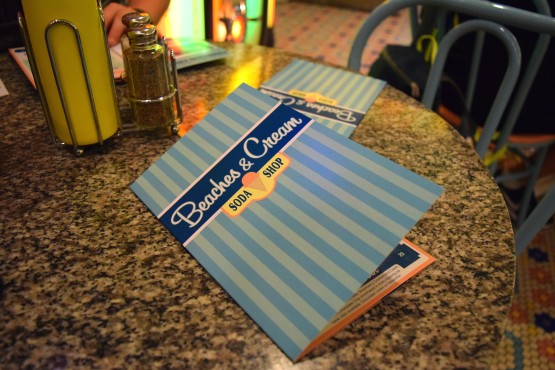 I’m not sure if Beaches and Cream is always this busy, but when we were there recently the takeout side had a pretty long line– at that point I’d rather just wait for a table. We originally wanted to go to Beaches and Cream with the intention of ordering the Kitchen Sink, aka:

We were so set on getting the Kitchen Sink since we had never done it before, but by the time we sat down in Beaches and Cream we all realized we were actually pretty hungry and kind of wanted more of a meal instead of ice cream. So we haven’t tried the Kitchen Sink yet, but I guess that just means we’ll have to go back and try it another time. 😉

For dinner, I got a cheeseburger, while everyone else went for the grilled cheese and tomato soup. My cheeseburger was very good, and for the price I would definitely forgo a similar quick service meal to go for a table service meal at Beaches and Cream instead. We all especially liked their fries, as for whatever reason, thicker cut fries are not all that prevalent around Walt Disney World.

As an aside, the grilled cheese and tomato soup does not actually come with as many pickles as you’ll see in this photo. We had one person with us who liked pickles, and everyone else who did not– sorry to let you down if you were expecting triple servings of pickles in this dish! 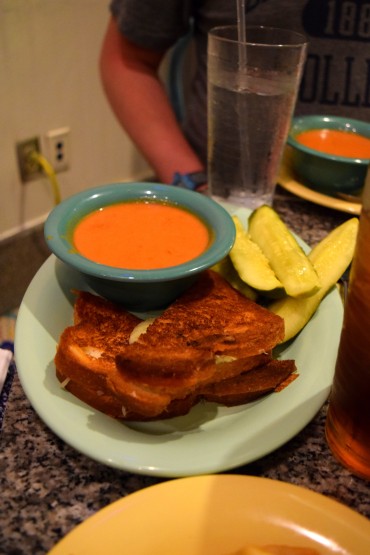 I can’t imagine having any kind of soup while in Orlando during the spring or summer months, but everyone really enjoyed it. I do not like, and no nothing of, tomato soup so you’ll just have to take their word for it!

For dessert, we all went in different directions since we decided to pass on the kitchen sink. Chaz got a Guinness Float– which is exactly what it sounds like: an ice cream float made with Guinness instead of soda. Definitely not my thing (I’m not a huge fan of Guinness anyway) but Chaz really enjoyed it.

We also had the brownie sundae– which is pretty self explanatory and all kinds of delicious:

My ice cream was a make-your-own sundae technically, however it was essentially a mini version of the No Way Jose. The No Way Jose comes with peanut butter and hot fudge over chocolate and vanilla ice cream, peanut butter and chocolate morsels, whipped cream, and a cherry. Doing the make-your-own version of this same sundae made more sense to me because I knew I would never be able to eat the other one, especially after the cheeseburger. This is the smallest of the make-your-own sundaes: 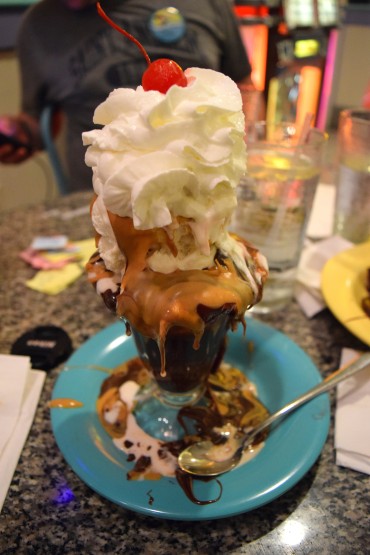 We really enjoyed Beaches and Cream, and we’ve already discussed how this is definitely our new favorite ice cream spot while in Disney. We do have to try the Kitchen Sink still after all. Beaches and Cream has earned a 100% rating from us for the delicious food, excellent service, and some of the best ice cream we’ve ever had.

I have a question! I thought I had 24 hours more than I did to choose a Dorm and time to leave and I waited till the last minute, so my offer was canceled. Is there anyway to get the offer back?

I'm currently going into the DCP soon. Can you bring a taser or pepper spray for protection?

I ordered from a personal shopper before just because I wanted a Dooney & Bourke Cinderella bag to wear on my next Disney trip. The bag was sold out as they are limited edition and were no longer available on shop Disney. I ordered from a personal shopper that also does shopping blogs and character Warehouse blogs. She seems like a nice lady. She had also suffered from an illness several years ago which also made me more sympathetic towards her. So I purchased the back. The bag was 270 Plus if I'm not mistaken $40 and a tip for the personal shopper which I gave $20. When I received the bag it looked like it was used although the tag was on it. It smelled of cigarettes. The interior of the bag did not look like the standards that Dooney & Bourke go by. It was not high quality. I have several Dooney & Burke and I know that they put extra care in the interior of the bags. This Cinderella bags looks cheaply lined in the interior and it smelled of cigarettes. What a disappointment. I regret making this purchase and I will never purchase anything from a personal shopper again.

Hey! We have been confused on the sleepover rules. Are people allowed to stay?

You can have a second job, but you have to give Disney full availability. The only way having a second job is really doable with a Disney schedule is if you freelance or do something like uber or doordash where the schedule is entirely up to you.